Alonso Berruguete: First Sculptor of Renaissance Spain is the first major exhibition held outside Spain to celebrate the art of the most important sculptor active on the Iberian Peninsula during the first half of the 16th century. Berruguete was a revolutionary force in the arts, famed for creating sculptures in painted wood that convey astonishing depths of emotion through their dramatic poses, gestures, and facial expressions. The exhibition presents more than 40 works from across his varied career, including an early painting from his time in Italy as well as a selection of his drawings. The primary focus is on his sculptures, however. A large group of his finest have been lent by the Museo Nacional de Escultura in Valladolid. Some are used at the Gallery to recreate a section of one of his elaborate, multi-tiered altarpieces, known as retablos in Spanish. 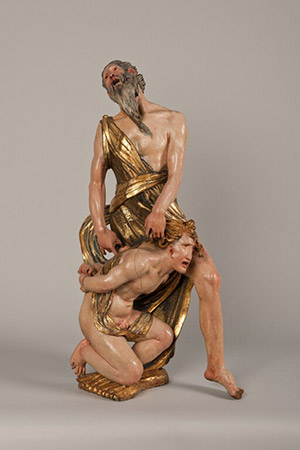 The exhibition is curated by C. D. Dickerson III, curator and head of sculpture and decorative arts, National Gallery of Art, Washington.

A fully illustrated catalog accompanying the exhibition is the first general book on Berruguete published in English and features essays by Dickerson as well as Manuel Arias Martínez, head of collections and deputy director, Museo Nacional de Escultura, Valladolid, and Mark McDonald, curator of prints and drawings, The Metropolitan Museum of Art.

The catalog is published by the National Gallery of Art in association with the Meadows Museum, SMU, Dallas; Centro de Estudios Europa Hispánica/Center for Spain in America, Madrid and New York; and Yale University Press, New Haven and London.

The exhibition is organized by the National Gallery of Art, Washington, and the Meadows Museum, SMU, Dallas, in collaboration with the Museo Nacional de Escultura, Valladolid